Don’t Have a Lab? Build Your Lab in the Cloud with Windows Azure Virtual Machines. Try Windows Azure for free with no cost or obligations, and use any OS, language, database or tool. FREE Trial Step-By-Step 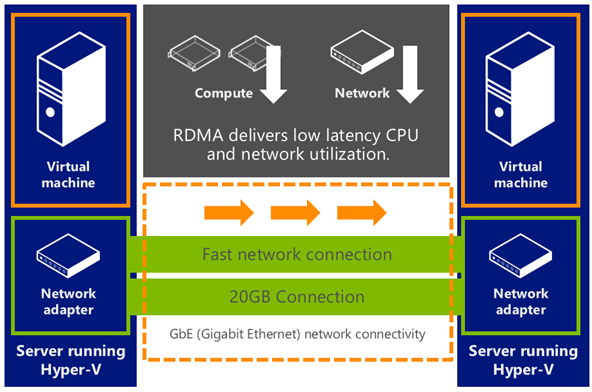 Introduced in Windows Server 2012 R2, Hyper‑V Replica provides a storage-agnostic and workload-agnostic solution that replicates efficiently, periodically, and asynchronouslyover IP-based networks, typically to a remote site. It also allows an administrator to easily test the replica virtual machine without disrupting the ongoing replication. If a disaster occurs at the primary site, administrators can quickly restore their business operations by bringing up the replicated virtual machine at the Replica site. New in Windows Server 2012 R2, Hyper-V Replica now allows for variable (configurable) replication frequencies (30 sec., 5 min., 15 min.) and also supports multiple nodes; this means that tertiary replica sites are supported, for example in the case of a service provider who wants to replicate a customer’s workload to another (tertiary) data center.

Isolating virtual machines of different departments or customers can be a challenge on a shared network. When these departments or customers need to isolate entire networks of virtual machines, the challenge becomes even greater. Traditionally, VLANs are used to isolate networks, but VLANs become very complex to manage on a large scale. Hyper‑V Network Virtualization solves this problem. With this feature, you can isolate network traffic from different business units or customers on a shared infrastructure without using VLANs. Hyper‑V Network Virtualization also lets you move virtual machines as needed within your virtual infrastructure while preserving their virtual network assignments. Finally, you can even use Hyper‑V Network Virtualization to transparently integrate these private networks into a preexisting infrastructure on another site.

The multi-tenant VPN gateway in Windows Server 2012 R2 allows Hyper-V Network Virtualization, which was introduced in Windows Server 2012, to span physical and virtual networks, as well as across premises, enabling site-to-site connectivity for multiple tenants to be deployed in a single virtual machine and in a highly available environment. This feature is managed through System Center Virtual Machine Manager.

Windows Server 2012 introduces new File Services features that let you store server application data on file shares, leveraging the new Server Message Block 3 (SMB3) protocol and taking advantage of low-cost, ‘commodity’ hardware. A variety of performance enhancements and availability improvements come together to make file share storage a great low-cost choice for critical workloads such as Hyper-V and SQL Server. File services can now endure a variety of failures transparently – resulting in no interruption in service to the users – or servers – which depend on them for storage. These new File Server features allow you to easily create and manage an optimally available data storage foundation for critical application services such as Microsoft SQL Server and Hyper-V. An array of new SMB protocol enhancements and capabilities such as transparent failover, SMB Direct, and SMB Multichannel give you benefits and performance that are similar to much more expensive storage area networks (SAN). 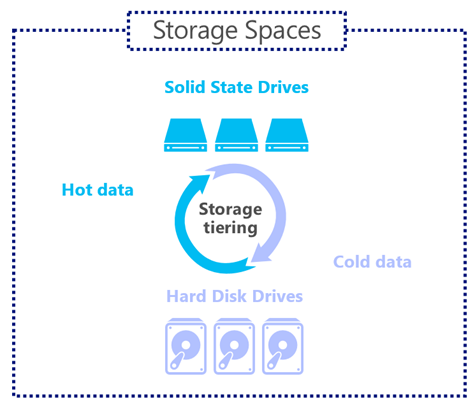 Work Folders allows users to synchronize files, originating from corporate file servers to their devices anywhere through a sync service. IT can configure a file server to provide Work Folder sync shares for each user to store data that syncs to their devices, including integration with Rights Management. 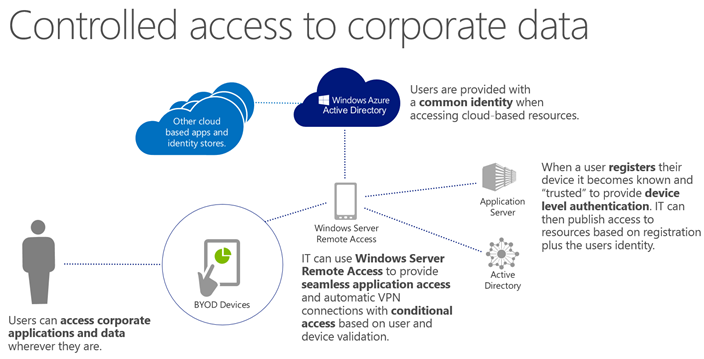 Windows Server 1012 was the first to bring the concept of “Shared Nothing Live Migration” (no shared storage required) to life.  Now in R2 it is even better. With Windows Server 2012 Hyper-V, you can perform a “Shared Nothing” Live Migration where you can move a virtual machine, live, from one physical system to another even if they don’t have connectivity to the same shared storage. This is useful, for example, in a branch office where you may be storing the virtual machines on local disk, and you want to move a VM from one node to another. This is also especially useful when you have two independent clusters and you want to move a virtual machine, live, between them, without having to expose their shared storage to one another. You can also use “Shared Nothing” Live Migration to migrate a virtual machine from one datacenter to another provided your bandwidth is large enough to transfer all of the data between the datacenters. 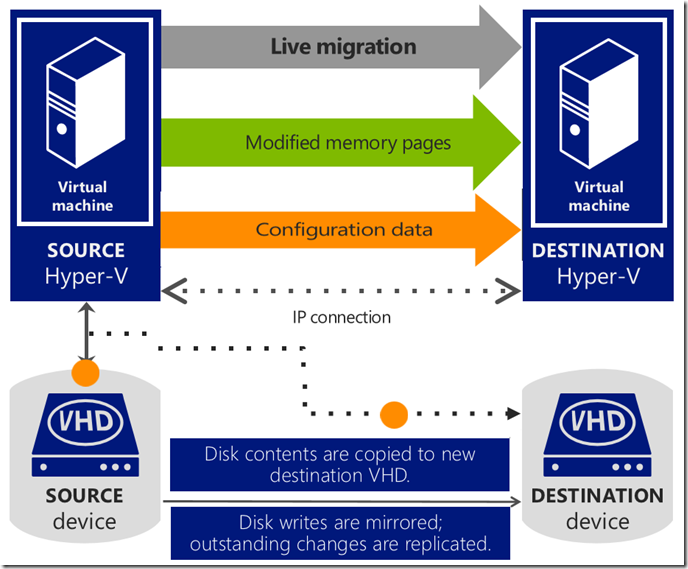 Continue to watch this series as we dive much deeper into all of these features and more.  Return to the Blog Series Index at http://aka.ms/w012r2-01