To get information about Windows PowerShell execution policies

A PowerShell script is nothing more than a TEXT file. You can create it with notepad or any other text editor. When you save it give it a .PS1 extension. If you have extensions hidden, you will need to select file type All Files (*.*) 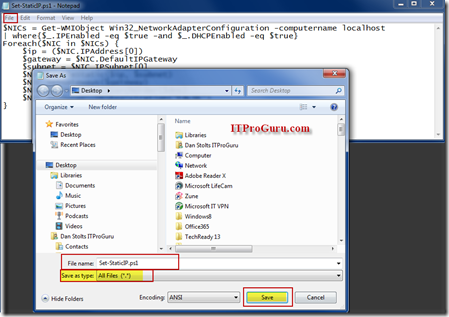 When you run a Windows PowerShell script, you must always indicate the full path with the name of the script even if you are working in the directory in which the script is located. If the script needs (or powershell command window) needs elevated permissions to do a task you will get an error if you have not run the PowerShell window using elevated permissions.  See How to Run Any Program Including PowerShell with Elevated Privileges (aka Administrator Permissions).  You can use the following methods to run a Windows PowerShell script:

In order to run a script, you have to allow that script to run.  I will do this by setting my execution policy to RemoteSigned.

RemoteSigned – Scripts can run. – Requires a digital signature from a trusted publisher on scripts and configuration files that are downloaded from the Internet (including e-mail and instant messaging programs). – Does not require digital signatures on scripts that you have run and that you have written on the local computer (not downloaded from the Internet). – Risks running unsigned scripts from sources other than the Internet and signed, but malicious, scripts.  See http://technet.microsoft.com/en-us/library/dd347641.aspx for more detail.

first I want to get the current execution policy

There are no policies defined which means it is using the default which is Restricted.

You can change the policy by issuing the PowerShell command. But that does not work.  It does not work because you likely do not have the rights to change this setting.  However, when you run the command you do get a pretty detailed error message.

NOTE: if you try to set the ExecutionPolicy from a PowerShell window (even if it has elevated privileges) you will get a message similar to:

The only way I see to get around this is to manually go into the registry to set the settings.

WAIT – You know what they say about editing the registry – Perform this task at your own RISK!

Start – regedit – <ENTER>… drill down to the proper location…

If there is an ExecutionPolicy value in the right pane, just change it to RemoteSigned (Double-Click).  If there is not, you will have to create a String Value.

Once you do this, you can run the get-executionpolicy –list command again with the following results

Now you can run PowerShell scripts on your local machine!